QUIET RIOT returned to us on the fourth of August with their new album, 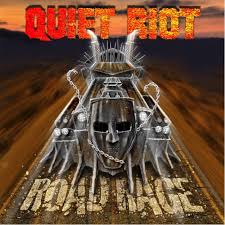 “Road Rage”. Led by drummer Frankie Banali, who is joined by veteran bassist Chuck Wright (who has been in and out of the band since 1982), guitarist Alex Grossi (who has been in the band since 2004, they are joined by new vocalist James Durbin. “Road Rage” was originally scheduled for release in the spring of 2017, but with the addition of American Idol contestant James Durbin on vocals, the band decided to scrap the original sessions and record a new version of the album. Was it worth it?

I always worry when i see someone go from a TV talent show, such as American Idol or the X-Factor, into a rock band. It might seem harsh, but i generally think people who love rock and have talent are already out there, working the clubs etc and building their reputation on the rock scene. This is not always the case tho; Nathan James for example appeared on a TV talent show and he has a superb voice. I’ve seen him perform live (with Jeff Scott Soto as it happens) and he is as impressive on stage and in person as he is on an album. But still I was worried when i knew that the new leads singer of Quiet Riot had appeared on American Idol.

As it happened, he and thus the Quiet Riot album itself, was better than expected, but my expectations had started pretty low. There were a handful of decent songs on here, “Still Wild” being the best the album has to offer. That song in particular has a good, slick rhythm.

Other than that, “Wasted” and “Freak Flag” are both fairly decent.

Verdict: 6.5 /10. The album was better than I had expected, it had a couple of decent songs, but the only one I enjoyed was “Still Wild”, and that wasn’t enough to carry the album for me. Sadly, this one just fell flat.