Teutonic metallers ACCEPT  continue their steady stream of releases with “The 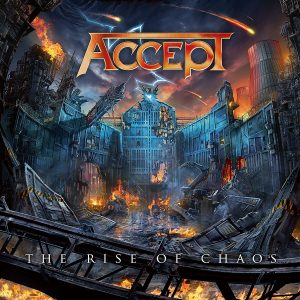 Rise Of Chaos”, their fourth studio album since 2010.  Is this a good album, or are they just a long time band trying to cash in?

Hell no they aren’t! The album starts of with “Die By The Sword”, a song that had me singing along the first time i heard it. Lightning guitars, fast drums, and their trademark choir sound drew me into this album very fast. What an opener!

Other highlights include “No Regrets”, another sound characterised by the combination of galloping drums and fast guitar solos. “Carry The Weight”, the heaviest track on the album also fall into this category.

There’s another couple of particularly catchy songs here too, “Koolaid” being the first, and “Analog Man” being the second. This one is rather thoughtful as well as it considers the world’s increasing digitization; “I’m an analogue man, trapped in a digital world.” This one also has a catchy pre-chorus, and deserves a slot on upcoming live sets.

If you are familiar with ACCEPT then you probably know what to expect here. “The Rise Of Chaos” is consistently good throughout, features their trademark choir sounds combined with great drumming and fantastic guitarwork.

Verdict: 8 / 10. Accept show why they are still one of the best metal acts around.

Accept “The Rise Of Chaos” was released August the 4th via Nuclear Blast Records. The first live performance from the album is at Wacken Open Air 2017.