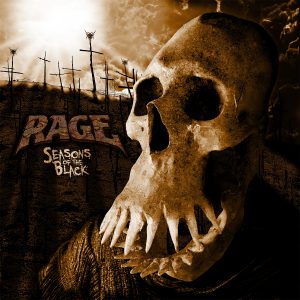 career. Built around Peter Wagner, Rage has certainly stood the test of time.

Seasons Of The Black was recorded at the Megafon studios in Burscheid, Germany and at the Soundchaser studios in Zandhoven, Belgium and produced by the band itself. Once again, Dan Swanö (Arjern Anthony Lucassen’s Star One, Marduk, Dissection, Opeth…) did the mix and mastering, and the artwork was created by Karim König. So whats the verdict on this one?

This is a blistering metal album. The highlights for me include “Blackened Karma”, “Septic Bite” and “Justify”. But they aren’t the best songs on the album.

That honour goes to the album’s final song “Farewell”. “Farewell” isn’t just the final song on the album though, but the conclusion to a 20 minute opus comprised of four songs – “Gaia”, “Justify”, “Bloodshed in Paradise”, “Farewell” – which are collectively called The Tragedy Of Man, a saga which tells of the development and extinction of man.

Peavy Wagner explains: “The concept of the four songs that are combined under ‘The Tragedy Of Man’ are straight and simple about the extinction of mankind. The world could be such a wonderful place, if people weren’t so stupid to sawing off the branch they are sitting on, waging war, driven by jealousy and greed. We are telling the story of this development, from the beginning (‘Gaja’) to the total destruction (‘Farewell’)”.

From my view, “Farewell” is a reflective, powerful, cleverly written track, which see’s Wagner at his best, with strong and emotional vocals. It’s a beautifully arranged track, and one of my personal favourites by Rage altogether. It’s epic, sorrowful, with heartfelt vocals and beautiful guitars.

“Seasons Of The Black” is a real slice of heavy metal, with some fast paced and heavy songs, and its four track opus ‘The Tragedy Of Man’ is excellent.

Verdict: 9 / 10. This was going to be an 8.5 / 10, until i heard “Farewell”. That song is worth the price alone. If you like metal at all, you need to check this album out, but if you aren’t normally a metal fan, yeah, you still need to check this out for “Farewell”. “Seasons Of The Black” is a fine addition to Rage’s impressive catalogue of albums.

Rage “Seasons Of The Black” was released July 28th via Nuclear Blast Records.