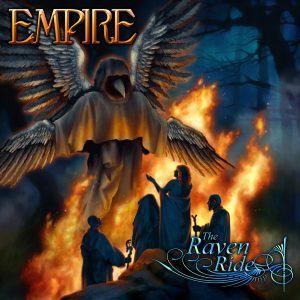 Razorback, Crematory) and they released very well received albums between the years 2001 and 2007. On each of these releases, Munkes was accompanied by numerous high-class musicians. Throughout 2017, German label Pride & Joy Music are reissuing revised editions these albums. Third in line, “The Raven Ride” will be released on August 18th, 2017 with one bonus track. So in case you missed it on The Bards Corner Music News lets talk “The Raven Ride”.

“The Raven Ride” was originally released in 2006 via German label Metal Heaven, and was their most successful album to date. So who joins Rolf Munkes on this album? The line up for Empire is completed by former Black Sabbath and The Cage vocalist Tony Martin, ex-Whitesnake, Brian May Band and Black Sabbath bassist Neil Murray, and ex-Rage/ex-Axxis drummer André Hilgers.

The album opens with the titular track “The Raven Ride”, which boasts a beautifully heavy rhythm and is definitely my favourite song, as does the second track “Breathe”. These are two of my favourite songs on this album, and worth the price of admission alone.

The other highlight here is the 9th track, “I Can’t Trust Myself”, a song which is almost fiendishly catchy, and would probably have been my favourite song in any live performance by Empire if i had seen them live. “Carbon Based Lifeform”, which appears on this album twice, both as track 3 and as the reissues closing bonus track, deserves a mention for 2 reasons; its very good, and its very strange. It has a hint of prog metal in it.

“Al Sirat” is carried by a very good riff with some fine soloing, and “Maximum” sounds like someone let the band seriously overindulge in Red Bull.

Verdict: 7.5 /10. The first three highlights i mentioned, “The Raven Ride”, “Breathe” and “I can’t Trust Myself” are all excellent, and more than make this album worth getting. There were songs on here I actually disliked though.

Empire’s album “The Raven Ride” will be reissued on the 18th of August via Pride and Joy.
The history of EMPIRE began in the year 2001 with the release of the album “Hypnotica” (Lion Music) which featured both the American singers Mark Boals (ex-Yngwie Malmsteen) and Lance King (ex Nightmare) on vocals. The line-up at the time was completed by Neil Murray (bass, ex Whitesnake, Brian May Band, Black Sabbath etc.), Gerald Klos (drums), Anders Johansson (drums, ex Stratovarius) and Don Airey (keyboards, ex Rainbow, Deep Purple). Rolf Munkes produced „Hypnotica“ himself; the mix was handled by Stefan Kaufmann (ex Accept, ex U.D.O.).

Only one year later, “Trading Souls”, the band’s second album came out on Lion Music. The CD once again was produced by Munkes with the mix being handled by Kaufmann. On this release, singer extraordinare Tony Martin (ex Black Sabbath) replaced King and Martin on the vocal spot.

In 2007, the so far last album of EMPIRE saw the light of day. “Chasing Shadows” was once again released on Metal Heaven and the first record feat. former Rainbow singer Doogie White in the line-up. Mike Terrana (ex Rage, ex Axel Rudi Pell, Tarja Turunen) joined the group on drums.