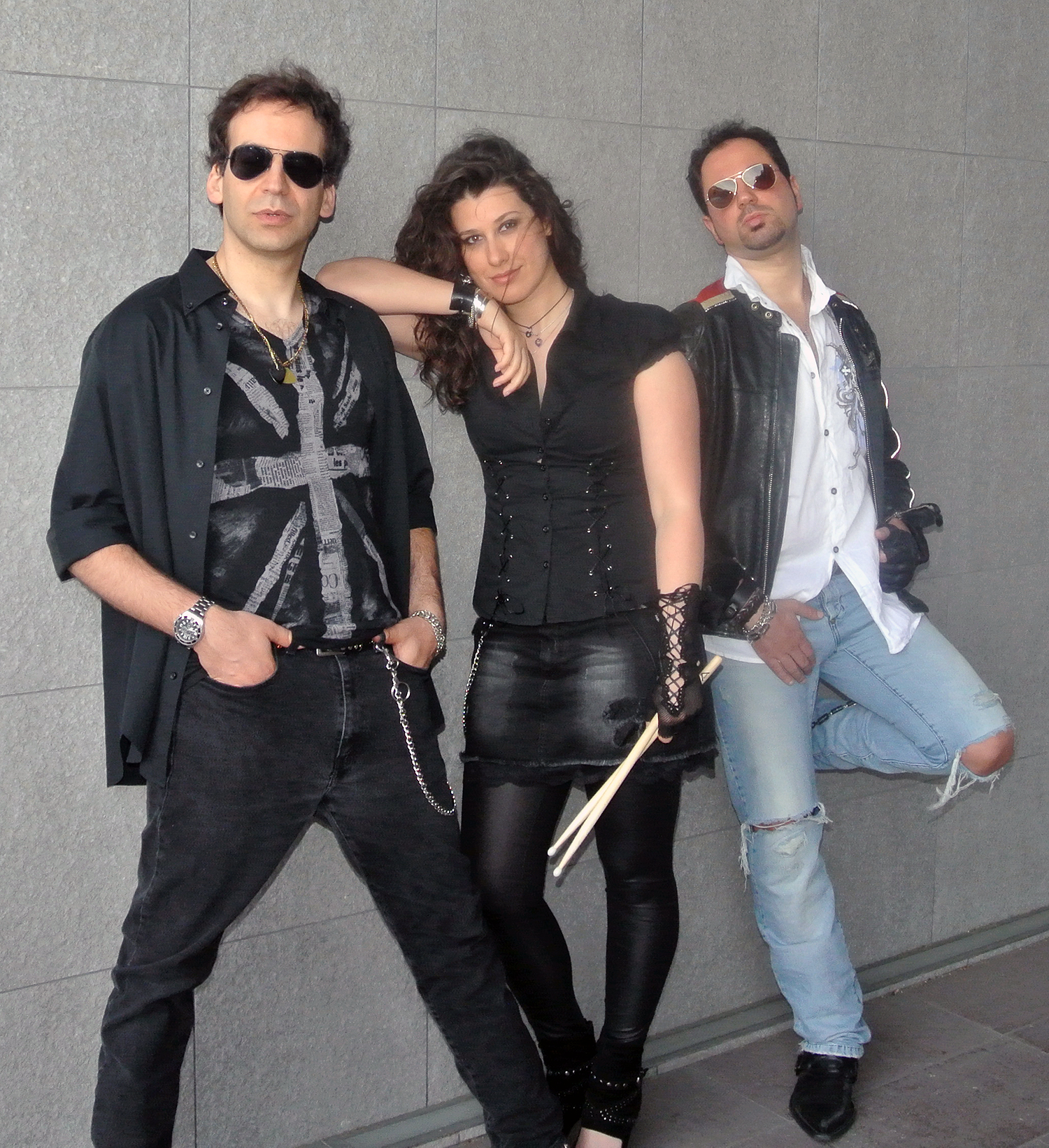 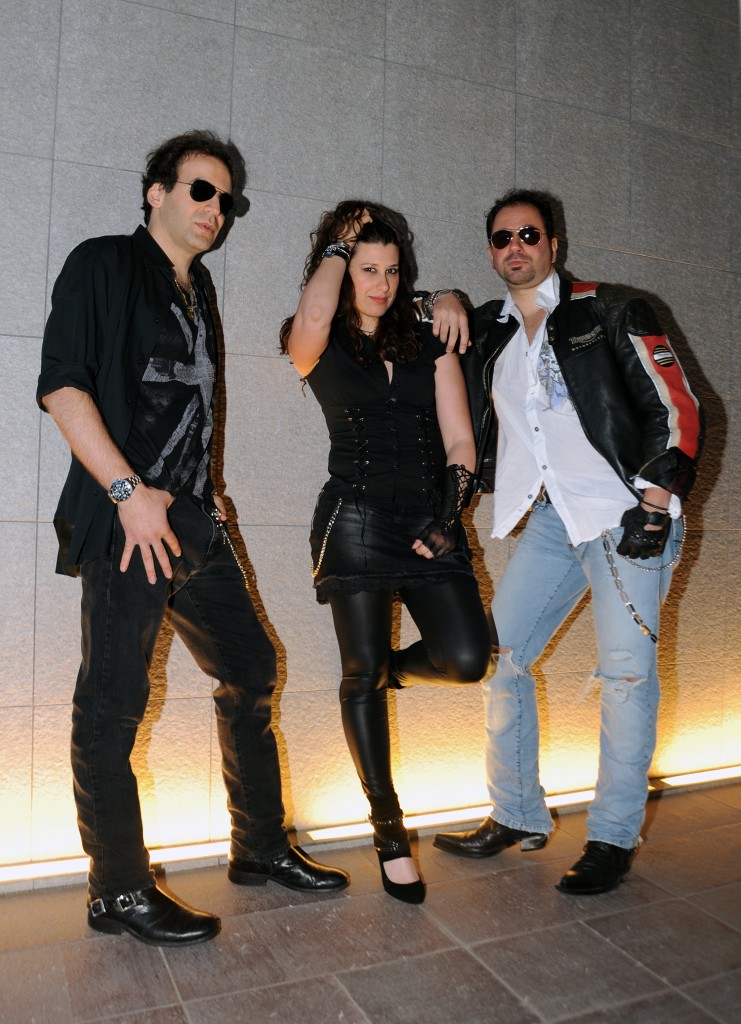 Saints Trade. Since then, we’ve managed to have a chat with them about their first oversea’s show, the reaction to A Matter Of Dreams, and a certain pair of legs.

Hi Santi, hi Joana, Firstly thank you both for speaking to us. So congratulations on your first release, what has been the initial reaction to “A Matter Of Dreams” and how are sales going at the moment?

Santi – Thank you so much! At the moment we are just taking the first step…doing some promotion and sending the album all around to spread the name and try to get the chance to be noticed by a label to have the possibility to record a full-length.

Right now I can say we sold a hundred copies in a month…and still we have to face the autumn gigs hoping to sell more and stay under the spotlights!

By now you can ask your copy contacting the band at saintstrade@yahoo.com or at the official page www.facebook.com/saintstrade .

What are your main influences, and how would you describe your music to someone who hasn’t heard you yet?

Joana – What I find essential for Saints Trade’s sound is the fact that each and every one of the band members has different music background – Santi is more ’70s classic rock and blues child, Claus brings the heavier aspect of the band, listening to mainly heavy, thrash and death metal, and I, for one, am more soft, carrying in my heart mostly the AOR and hard rock music. So, if you put all these in a recipient and use the mixer for about 22 min., you’ll get an idea of our sound! Jokes apart, we’ve had a talk at the very beginning of our career regarding the music line to follow, and it is hard rock.

How long was the writing and recording process for “A Matter Of Dreams”, and was there any particular highlights or challenges along the way?

Santi – It took more or less one year from the moment we decided to write something “our own” instead of being just a cover band like many.

Claus and I started working on some riffs and ideas we had, changing time to time lyrics, solos, titles and in the end adding Joana’s drumming to come out with the definite versions.

The recording process was faster than expected thanks also to Roberto Priori who made a fantastic job behind the desk giving some good advices to improve the quality of our songs.

Sheer example of it is “Face in the mirror”, the first song we wrote together Claus and I.

We felt something’s missing on it to have a catchier sound, so Roberto suggested to add some “gang chorus” turning the song in a good one. It sounded so Twisted Sister to me, I like it so much!

I can also tell about the song “Venus on the run” that came out in dream to Claus.

He dreamt about this beautiful lady walking on the streets and when he woke up he started immediately to play a groovy riff to underline her walking. Then he called me telling me “Hey, you have to write some good lyrics about a beautiful lady!”. Nothing easier, indeed…ladies are very good subjects for a song. 

Do either of you have a personal favourite song from “A Matter Of Dreams”?

Joana – It appears so! Personally, my fave track of the album is “City Of Angels”, up and slow tempo sequences with some great bass slapping technic, creepy riff and Santi’s versatile voice in here.

Santi – Yeah, if I have to choose I’ll say “City of angels” ‘cause it’s the one I entirely wrote so I feel it as a child.
Never/Ever is another song I feel close to my heart for his groove and “Purpleish”sound.

As a band, you’re currently a 3 piece in that you don’t have a permanent bassist at present. Do you think that had any affect on the writing or recording process, and will you be looking to fill that vacancy soon?

Joana: Oh yeah, we totally did! Few weeks ago Matteo Angelini joined the band with his amazing MusicMan. The guy is absolutely kicking arse, with his various music influences and live experience, we hope he’ll bring the band fresh ideas and will enrich the sound. He has played in a Red Hot Chilly Peppers cover band among the others, listens to progressive and funky music… Let me ask Santi to tell you more about him.

Santi – It was a kind of curse! Since our first bass player left, we spent almost six months rehearsing with different musicians trying to find the “missing link” and performing live having some friends as “special guests”. We were almost desperate because we had to perform at Fleetwoodstock Festival in UK, so I called a long-time friend who plays and teaches bass at hi-level to come and play with us.

He accepted and he asked us to record with us our tracks in the EP, so the bass lines you can hear come directly from Francesco “Joe” Passerini’s fingers. Thanks to him recording and shaping the songs became very easy.

Unfortunately he was that busy he couldn’t be a full-time ST member, so we kept looking for a bass player since Matteo came to rock our world!
Sure he will bring new blood to our music!

How did the two of you and Claus come together to form Saints Trade and how long have you been together?

We started as a five-piece which included also a girl playing keyboards, but we remained stuck in the rehearsal room until 2010, when our previous guitar player all of the sudden disappeared and we choose Claus as the perfect replacement: he was the right choice because he brought enthusiasm and new ideas to the band. That changed it all.

We started performing live six months later, right after the keyboard player left and we kept going on improving our sound , our presence on stage and also our fans…

Problems were just round the corner and our bass player left, so we spent months to find a new one until we found Matteo, as said before…

You performed in England at the Fleetwoodstock charity festival last year, so you became an international act before your first release. How did that affect you as a band and as individual musicians, and are there currently any plans to return to the UK? 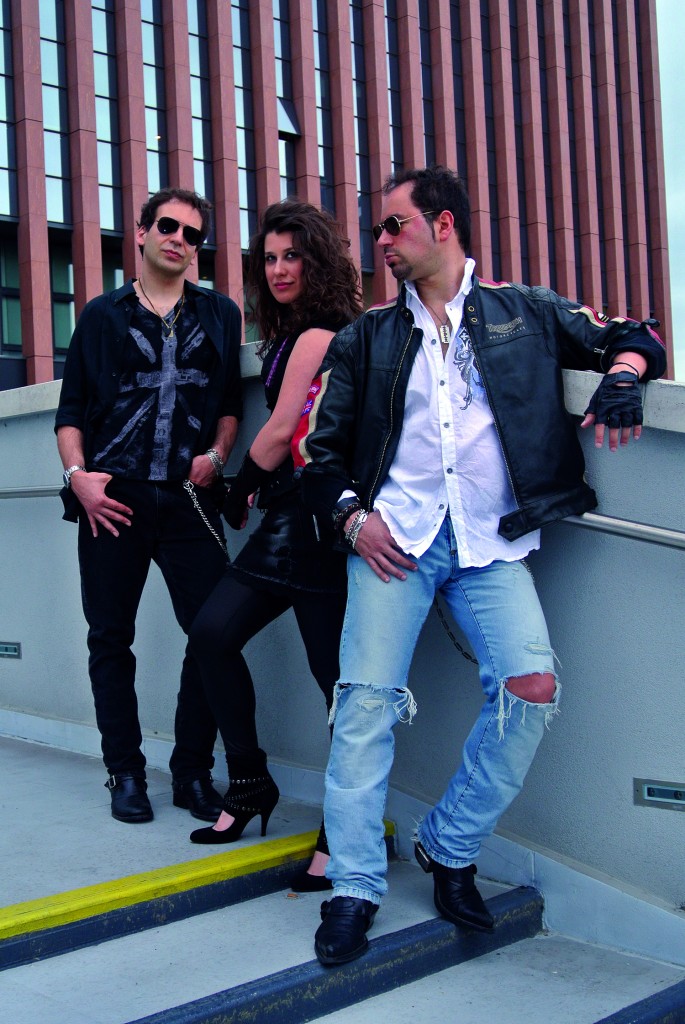 Joana – For me playing in UK, and especially at the Fleetwoodstock, means a lot. Surely there’s a reason for that – back in 2005 I and Santi travelled to Fleetwood to attend the festival. There were many “first time” for me personality then, but the most significant was the fact that we both saw for the very first time one of our favourite bands – TEN. So to speak, it was their fault for me and Santi to get to know each other. On the other hand, we met many lovely people out there which became dear friends. Special thanks to Simon Brayshaw, the chainman of the event, for his kindness and availability! Then the audience, which was really great. Of course we were a bit afraid of playing abroad, about how the people would react of an Italian band playing covers of some of the greatest UK rock bands of all times ( Queen, Judas Priest..), and about our songs, too. The Fleetwoodstock audience had the absolute exclusive to listen to Saints Trade performing their songs live ever. Was an incredible feeling to receive a positive feedback, to hear the guys and the gals clapping hands and singing along…. Just feels my heart.. Thank you!

Santi – It was an honour and a privilege for us, especially for me finding myself opening for my favourite band and seeing the band members close to the stage watching our gig.

We can say we received our “baptism of fire” and Gary Hughes and the guys were our “godfathers”!
Sweet emotions indeed…it was a night to remember. Sayin’ thanks it’s not enough.

Joana, there doesn’t seem to be a large number of women drummers in the rock scene, but the numbers are steadily going up. Why do you think this is, and when did you start drumming yourself?

You’re right. Unfortunately drums have always been considered as a “male” instrument. But I feel quite comfortable playing it and, actually, command the three guys in the band.  Kiddin’…. It’s funny, because I’m originally a piano player, used to take piano lessons at age of 7 and continued playing classical music until 11-12 years old. That was the period when I started to listen to rock music – Rainbow, Queen, Deep Purple. Surely, I adore classic music, but then I started to feel that the piano was too tranquil instrument for my rebel personality, haha. My brother was taking some drum lessons that time and I used to watch him fascinated. I’ve never taken drum lessons, I just trust my own sense of rhythm. The serious playing came with Saints Trade, three years ago. Since then I’ve never stopped drumming and I’m happy with it! Hope more women would approach this instrument, as it gives its satisfaction. Come on girls!!! 

With the new CD out, what does the future hold for Saints Trade? Do you have plans to start writing another release or are live performances going to be the main focus for now?

Santi – There’s something cooking in the kitchen: we are currently working on new songs that eventually could feature on a full-length album, even if is too soon to talk about it.

Next move is keep gigging around, playing as loud as possible…and of course waiting good feedback and review and get our chances.

So as always our performance will be a good mix of ST’s original track and covers…all in the name of rock! 

We are also planning a promotional video for one or two songs of the EP…time will tell. 

And Santi, how long did you have to practice the woman’s voice for “Bed Business”? 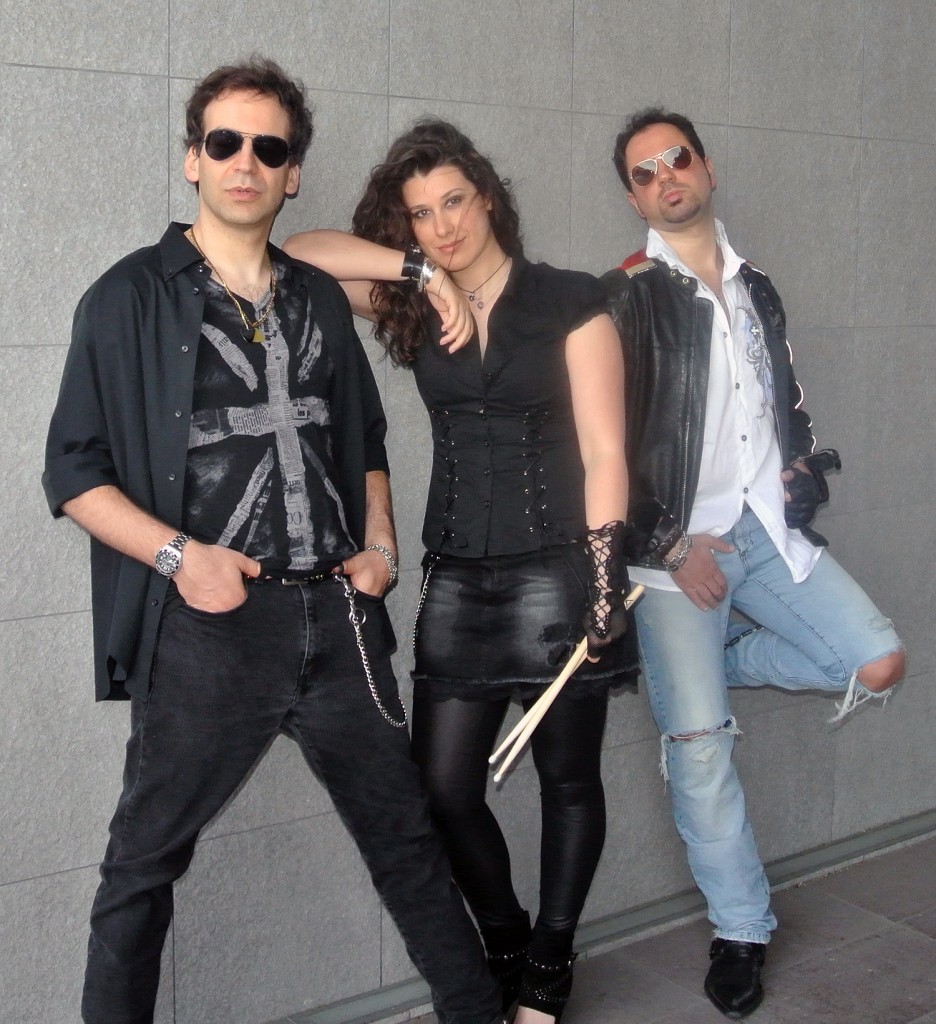 Ahahah…the girlie voice wasn’t meant to be, to tell the truth.

It was Roberto Priori’s idea (our sound engineer) while reading the lyrics and listening to me singing it before recording he told me “Why don’t you try to use a falsetto as a coup de theatre? You’re telling a story and you’re reporting a girl’s words…so you can try to sing girlie-style!”
I pretended to be a crazy Dave Lee Roth and started to sing my ass out…and I was astonished about how my voice sounded sort of Mrs Doubtfire!

Jo liked it and Claus too, so we decided to use it, just to show that we don’t take ourselves so serious. In the end it’s nothing more than a “divertissement”. 

And final question, is it Joana’s leg on the front of the album cover? (Please don’t say its yours Santi!)

Joana – I’m being paid to keep my mouth shut about it. 

Santi – I’ll keep the “secret” too, but I have to say…for the cover picture preview we made we used Claus’ leg!

Gosh, I have to delete these pictures!  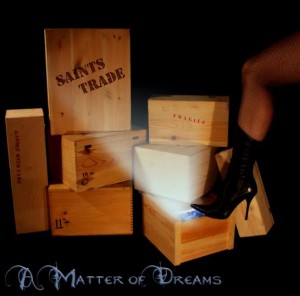 Joana – Thank you for your time and interest, guys! Hope to have a chance to talk to you soon again, as we’re having lots of ideas popping up in this period and, who knows where the next Saint’s Trade album is placed in the future… 

Santi – Thank you so much for your support, guys…Paradise Rock ROCKS!!!!!

You can read not one, but two reviews of A Matter Of Dreams by Saints Trade here.