We’ve actually got 2 reviews of this new album to share with you, to give you 2 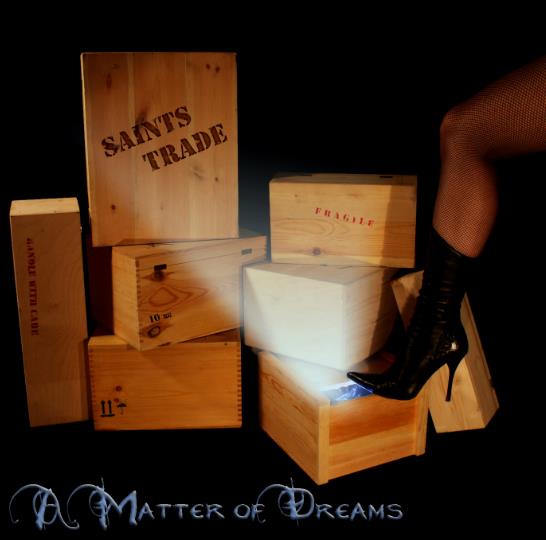 different perspectives. One was compiled by Laura-Kate, the other by Hamster.

The first thing that strikes when you put on Saints Trade ‘A Matter of Dreams’ is the quality of the production. Having seen this band for the first time live at Fleetwoodstock 2011 (a charity music festival in the North West of England) I have to say I am pleasantly surprised with the quality of this album, including the production and musicianship as these guys (and girl!) have definitely got some good musical grounding.

Their performance at Fleetwoodstock didn’t do them justice. Don’t get me wrong, the stage presence, especially the performance given by the ever soenergetic Santi made the band watchable. However since their set was mainly covers based, many songs weren’t suited to the lead singers voice. He suits more punk rock type songs, which is what we are offered on this album. In my opinion the band are trying to recreate the new wave of British heavy metal with punk rock aspects also thrown in there.

Definitely the best song on the album is ‘City of Angels’ as it has a catchy melody, written with hooks and the guitar solo seems to be well thought out making it the most enjoyable track on the album. ‘Bed Business’ is a typical break up tune and the only thing that ruins it for me is what is probably meant to be ‘the girls voice’…what the? I guess that is just the fun aspect of the band, just having a laugh and not taking themselves too seriously. Overall ‘A Matter of Dreams’ is a full on rock-out but with not even half an hour of rock, it leaves us wanting more!

Having witnessed Saints Trade perform live at the Fleetwoodstock charity festival (an event held in the North West of England), nearly nine months before the release of their debut EP, I was looking forward to hearing their debut, although with some trepidation.”Why is that”, you may ask.

Here’s why. I enjoyed watching Saints Trade, and it was equally obvious that the band were enjoying being there on stage. The band’s stage performance benefit from having an energetic frontman, in the form of lead singer Santi, although there seemed to be one or two problems with the sound equipment during their set. His stage antics also kept the crowd amused as well as giving a lot of energy in his performance. However, as a new band they only had a couple of original songs in their set, the rest being made up of classic rock tracks by the likes of Judas Priest, Whitesnake, and AC/DC. While those songs were enjoyable enough, they didnt really suit Santi’s voice as well as their original pieces did, and that was what concerned me – that the debut release may have the same issues, with cover songs and poor sound quality, particularly as the debut “A Matter Of Dreams” was to be released under the bands own label.

Fortunately, neither concern was well founded.

The quality of the sound production was excellent, far better than many self produced albums I’ve heard. And there wasn’t a single cover song to be had. This is what I wanted to hear, because I had enjoyed their live original pieces so much. These songs do maintain the same elements of classic rock found in their choice of covers though. For me, the highlight of the album was the final song “Venus On The Run”, which had a heavier edge to it than the other songs on the album, with a good, chunky guitar riff to accompany Santi’s voice which I think suits heavier songs. That said I enjoyed all the other tracks on the album, particularly “Never/Ever”. There’s a cheeky little song too, “Bed Business”, which I enjoyed although I was a bit surprised by the false girls voice. “City Of Angels” is also a good rock song worth mentioning here. My only disappointment with the album is the length of the EP. It’s only 5 tracks long, and I would have liked more, as the EP is less than 30 minutes long, but it really a case of quality over quantity here, and with the EP being as good as it is, I think we can more than forgive them for that.

Verdict: 8.5/10. This is a great little release, with songs that should appeal to any and all classic rock fans. Great music for driving too. We eagerly await their next release.