Warner Drive are an original group from Hollywood, and they’ve been working 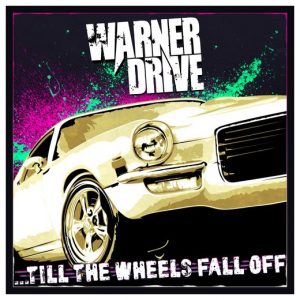 hard to grow their fan base. As a band they’ve shared the stage with groups like Ratt, Steel Panther, Papa Roach and The Killers, they’ve been touring internationally for years. “Till The Wheels Fall Off” is their forth album to date, but their previous three have had relatively low circulation.

So how best to describe them? Imagine that Bad News and Blink 182 had a baby, and they left that baby to be raised by Spinal Tap, but that baby grew up and recently broke into a music store. Yeah, I think thats about right.

Warner Drive are not the best band out there, but this album carries a really strong sense of humour and fun. The lyrics of several of these songs really made me laugh (with the band, not at them, thats an important distinction).

My personal highlight from this album is “Anthem Of The Douche”. That’s a well made song, but the lyrics made me laugh. Of the other tracks on this album, “Don’t Give Up”, “L.A. Psycho Chic” and “Karma’s A Bitch” are the other better songs.

Verdict: 6/10. I did enjoy listening to the album. This a pretty decent band, and its far from a bad album, but most of the appeal here for me was in the humour of the album, and I very rarely get an album out because it makes me laugh, which means that i doubt it would see more than 1 or 2 plays in the future. That said, if I was at a friends house and it was on, I’d likely enjoy it again. But that doesn’t feel like a basis on which i can recommend this album.

I’d say if you enjoy Spinal Tap and Bad News, but you want songs which are arguably more coherent and musically rock even more, then this is the album for you.

Warner Drive “Till The Wheels Fall Off” was released via Dead End Exit Records on the 28th of July.