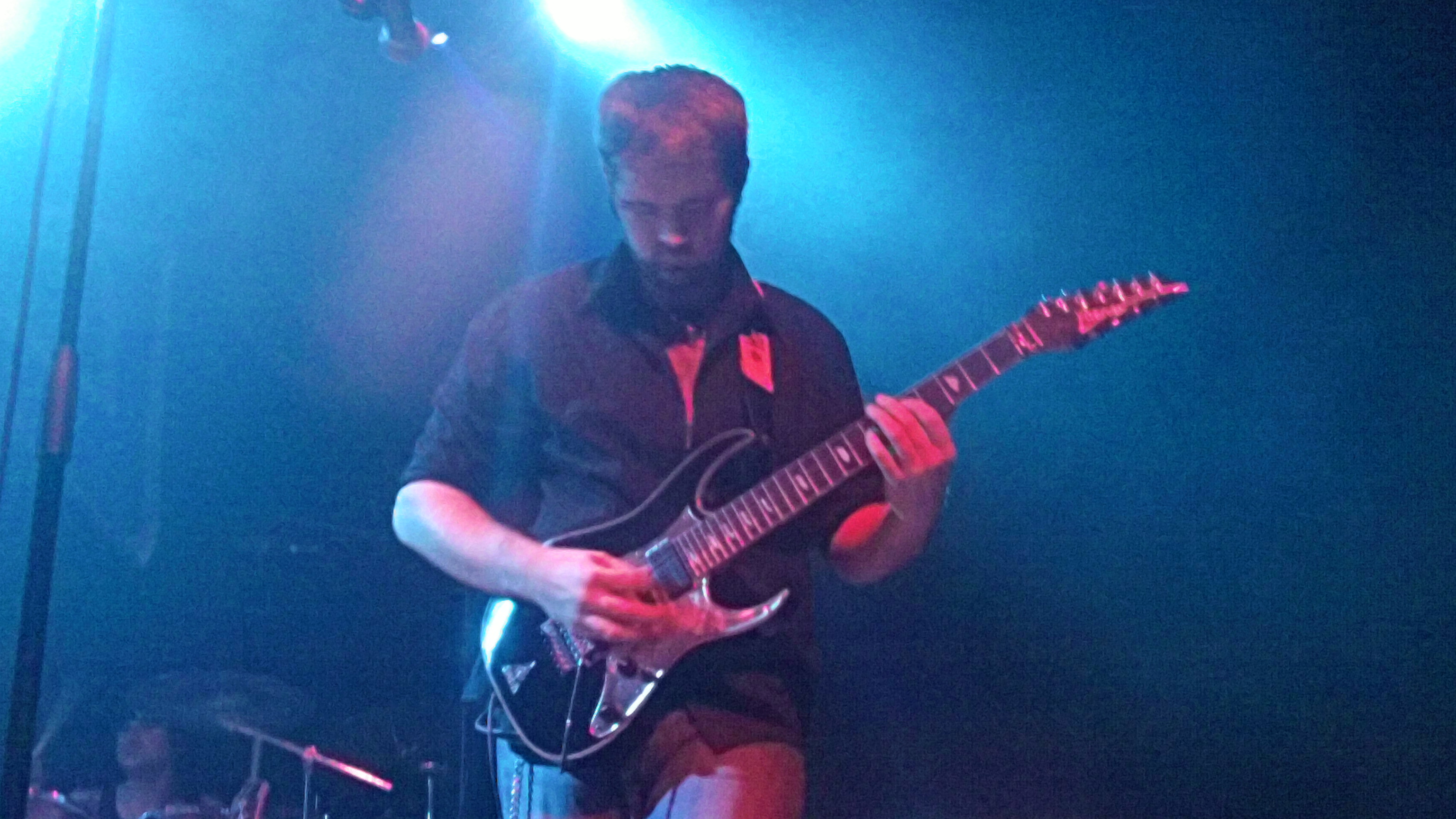 After a fantastic debut performance as part of TEN at Fleetwoodstock, guitarist Dan Mitchell gave us an interview to talk about the concert, meeting longtime fans, and what it’s like to join and play with a well established band.

Hi Dan, firstly thank you for doing this interview. Just a few questions for you (some of which were submitted to us by members of the facebook group Ten / Gary 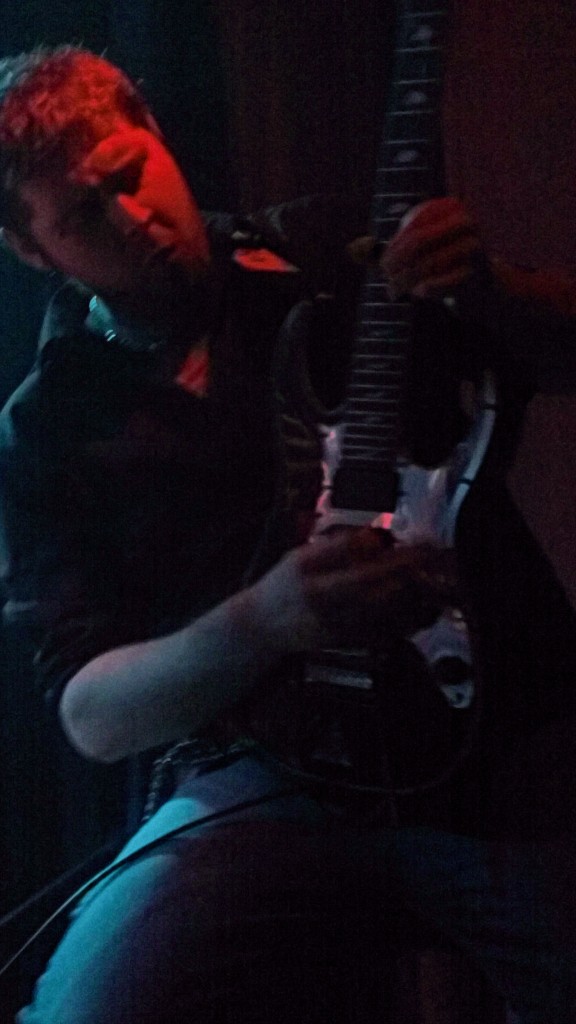 First of all, a big congratulations again on the Fleetwoodstock gig. How are yourself and the band feeling after the show, what is the mood in the band? Especially in comparison to before the show?

Dan: Thank you very much!! It was one off the greatest nights of my life for sure. As I have already mentioned to many of the fans themselves,it was an honour and a privilege to perform for them. Everybody else in the band was really pleased as well and I think it has created a real buzz within us all. I know that I am certainly excited about the potential of this current line-up and what it can bring to the table. As far as the mood before the show it was one of excitement really,I think we were all raring to get on that stage and give it our all!!!

What was the pre-gig meet and greet like for you and the band?

Dan: For me personally it was a wonderful experience. Not a single one of the fans(even the real hardcore fans)pre-judged me in any way,or were concerned that I would screw-up!!!They never put any pressure on me at all and this allowed me to get on stage and just be me. I can never thank them enough for that. Each and every one of the fans I met were an absolute joy to talk to and I know the rest of the guys really enjoyed chatting with them too.

Because Ten have been around for some time, and so have a well established sound, did that cause any nervousness or apprehension to you when you joined the band?

Dan: Not really,if I’m honest,because in a weird way the songs are almost tailor-made for my style of playing. I said this to Gary when he gave me some of the rough tracks for the new album. The way he writes is extremely accommodating to a guitar player and I always say the songs are like”gifts” to me as a player. I can be so expressive and use all of my styles of playing,it really is a total thrill to play in this band!!Also,as a fan of TEN’s early work and of Vinnie,Chris and Neil I always take care to keep any themes they establish in their solo’s. I don’t believe in stepping on anyone’s toes as a guitar player just for the sake of it(and certainly not to players of their standard).

Is there a Ten riff or solo that is even for you really hard to play, hard to get into the melody? Or let’s say what was the most difficult song for you during the rehearsals for Fleetwoodstock 2011?

Dan: Most of the songs I was lucky enough to pick up pretty quickly actually,the problems arose when we changed some of the keys!! I really only wanted to use my main guitar and so decided to just transpose the songs(that is,to play them in different 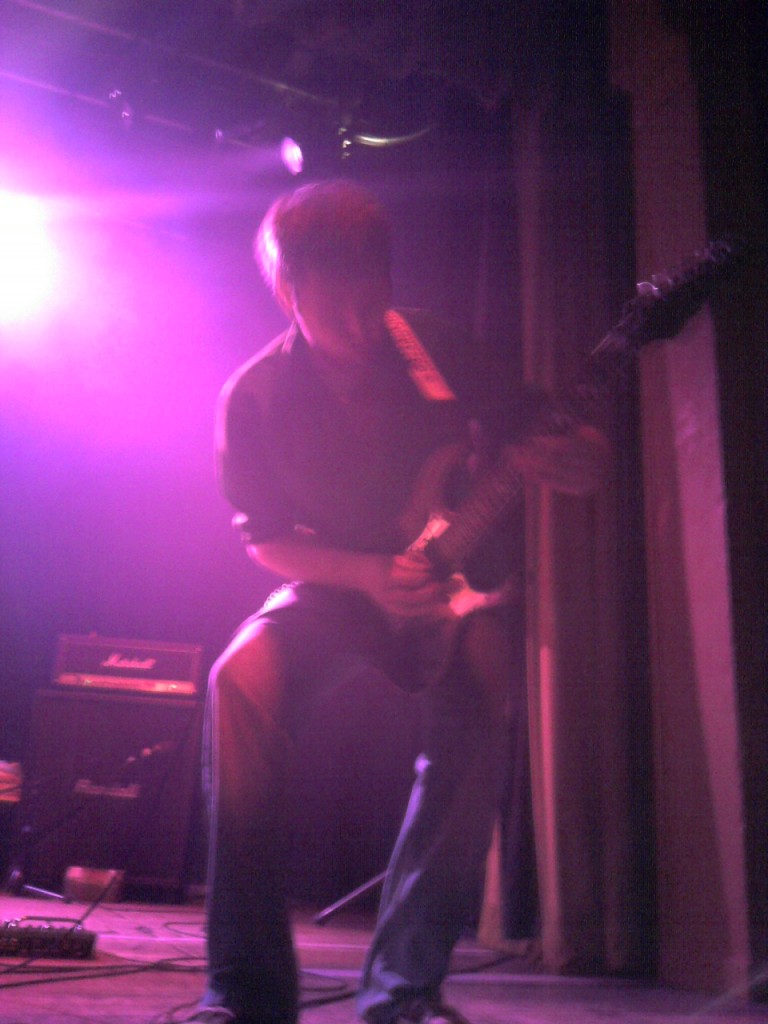 positions on the neck)instead of messing about with different tunings. This is all well and good,but it makes some riffs unavoidably tricky!! I think probably the most challenging riff would be the way I transposed the opening to”Name of the Rose”.I know some people who read this will say”why did you transpose it that way then”!!! But it is the only way to play it without detuning.

When rehearsing for Fleetwoodstock, were you encouraged to check out the original recordings or the versions from The Essential Collection?

Dan: For all the songs I was required to learn,I was given the original recordings(and where was possible,also their live equivalents).

On this sites you tube channel, we have a recording of Black Shadows (well done nailing those solo’s by the way), just before you start playing a couple of girls (who shall not be named) start yelling “Dan you’re awesome!” How does that feel when you’re on-stage, and did you feed off that energy?

Dan: Well it is actually kind of embarrassing because I have a funny feeling one of them was my Mum(mortified)!!!! But in all seriousness of course it is very flattering but I am not a guy who really knows how to take compliments,I just love to get up there and go for it!!! I definitely fed off the collective energy of the fans though. They made that night so special for me and I felt bullet-proof onstage. I was totally theirs for two hours and that sharing of energy is such an amazing feeling!!

Dan: Ooh,that is a tough one!! I really do genuinely love so many and I have still not heard the complete back catalogue in it’s entirety. At gunpoint,I would probably say”The Robe”,but I am also especially fond of”Valentine”,”Wildest Dreams”,”Ten Fathoms Deep”,”Spellbound”,”Apparition”,”Strangers in the Night”,”Through the Fire”,”When this Night is Done”,”Kingdom Come”….I have a new favourite every week it seems!! As far as my favourite song to play? That is another tough one(I feel I must apologise at this point for my frustrating indecisiveness)!!! It would be between”The Robe”,”Valentine”,”Fear the Force”,”Endless Symphony” and”Wildest Dreams”(better stop typing before I think of any more!!!).

Is there any particular guitar playing style that you aren’t familiar with at the present that you would like to learn?

Dan: I am ALWAYS learning,believe me. Aside from playing live my favourite thing in the whole world is practicing. I am always checking out new and exciting players on youtube who kick my ass and keep me inspired and turned on to new playing techniques/styles. I believe the only way to improve is to study someone of a much higher ability than yourself and always aiming for perfection. Ultimately you will never achieve perfection,but if you constantly strive for it,you will always be improving. There isn’t really a certain style I want to go after….I just want to do it all(dream on Dan)!!!! I can get equally inspired from watching an amazing shredder as I can some crazy country and bluegrass player!!!!

Do you play any other instruments?

Dan: Not really no,I suppose I could play bass just enough to get by and in the past I have played some keyboards(only as basic accompaniment to instrumental work I have done).I am only really drawn to the guitar. There are many other instruments I like to hear though,I like to watch a really good drum solo and I love the sound of the violin(when it is well-played!!!).I also think the saxophone is a wonderfully soulful instrument. Generally I just love to watch good musicianship,no matter what the instrument.

Do you or the other members (especially Gary) drop into the online forums, such as the facebook groups and pages? P.S try and encourage Gary to get on facebook!

Dan: Haha!! Me and Gary have talked about this before and he said he just can’t get his head round facebook!! In all seriousness Gary is a very busy man but I will certainly run it by him again,one day he may give in!!But as for the other guys,I think Darrell sometimes chats to the fans in the facebook group,as do I. Steve and Max are on facebook as well…..four out of six ain’t bad!!! 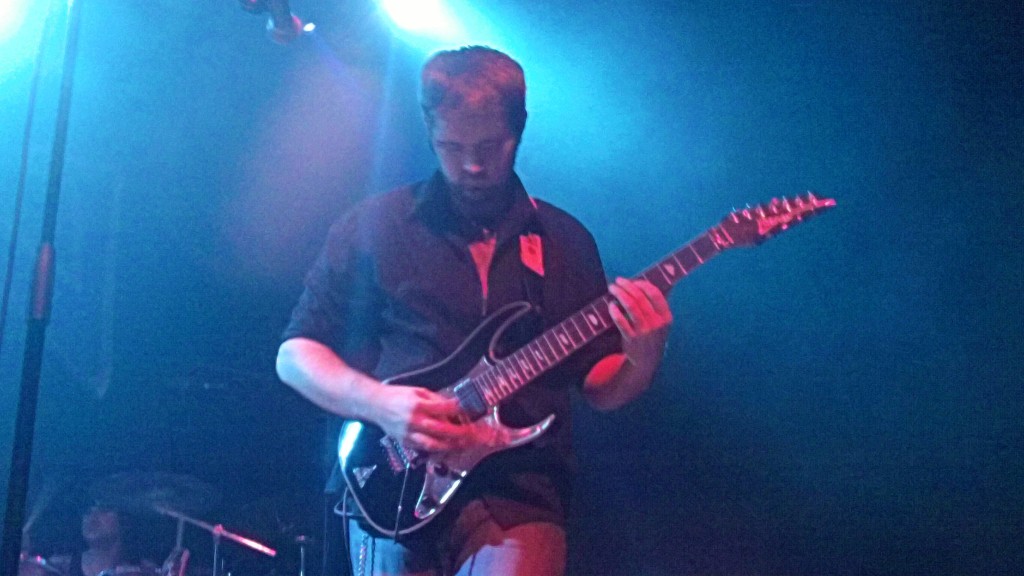 Two friends, Alex and Matthias, have recently built a new Ten fan site, have you had a chance to see tenfathomsdeep.net yet?

Dan: I have and it’s fantastic. There are some truly devoted TEN fans out there and I feel honoured to be a part of this band. I met both Alex and Matthias before the show and they are both brilliant guys. Much love and respect to you both!!!

Is there anything you can tell us about the upcoming the new album, such as what its called, what it sounds like, the songs, or rehearsing and recording it?

Dan: Now to the juicy stuff!!!I am currently immersed in the new songs writing all my lead work and I am really determined to put my all into this record(as is everyone else in the band).I have already written what I believe to be some of my greatest solo’s ever and I think the end product is going to be something VERY special indeed. There is such a diverse range of material and there is more than a few songs I am totally in love with!! I don’t really want to spoil it for you guys by revealing too much though,I think it is wrong to build people’s expectations,because everyone interprets things differently,do you know what I mean?All I will say is this,you are all in for a treat!!!!!

Do you have any other projects you’re working on?

Dan: I have been working on material for an instrumental album/EP(that will also feature Max and Darrell as well),but that has been put on hold obviously at the moment to record the new TEN album. I have one song complete and many more written so as soon as we are done recording the TEN album then I am gonna crack on with that!It will be a balance between the melodic and the uber-technical!!!!

What advice would you give any young ones (or old ones) out there wanting to learn to play the guitar?

Dan: I would say to anyone(of any age)that wanted to start playing guitar the same thing:just go for it!!Before I started playing I didn’t have any expectations as to how far I would take it and I even thought I would be too impatient and would quit almost straight away!!But something just clicked with me and my guitar and the same thing could happen to you!!You could be sitting on a goldmine of ability,you never know unless you try it!!!I remember reading an interview with the great Steve Vai once and he said something which was a tad idealistic but actually very true. He said”if you love music and the guitar,then the rest will take care of itself”,which is actually true. Just enjoy what you do,practice as much as is comfortable AND ENJOYABLE for you(very important)and be patient. Great things come to those who wait. Don’t be discouraged by trends and what other people say you should be doing,if you have a passion for something,then you have to go for it!!!!

Finally, anything you’d like to add or say to the fans out there?

Dan: I LOVE YOU ALL!!! I can’t wait for you to hear the new album!!!! I would also like to thank Matt Williams for this opportunity,thanks a lot bud and I wish you all the best for your new website!!! 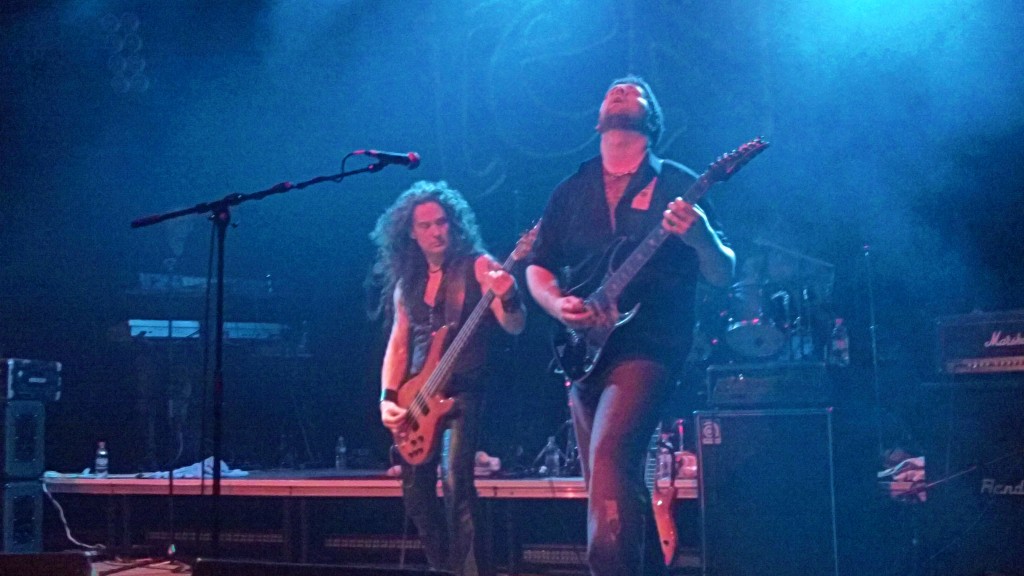