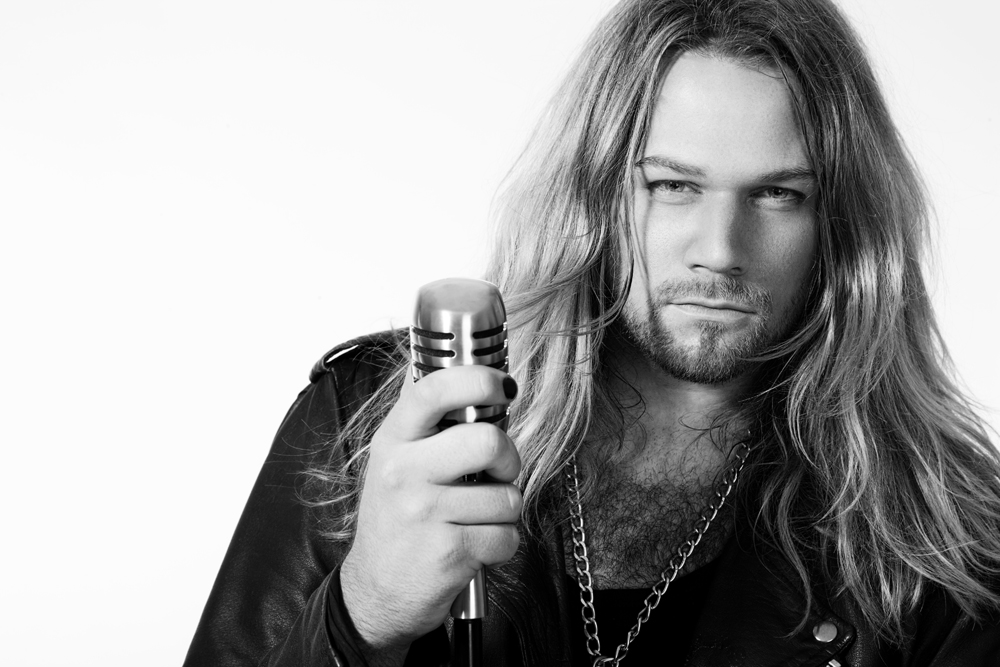 Hailing from Reading in Berkshire, over the last 5 years singer Nathan James has done just about everything – he has toured Europe and America with projects ranging from the prog rock extravaganza that is the Trans-Siberian Orchestra, performed with Route 66 (sponsored by Harley Davidson) and the Micheal Jackson Thriller, appeared on several UK TV shows and released his acoustic debut album. Paradise Rock’s Hamster had a chat this week with Nathan about his experiences over the last year and his plans for 2013.

Hi Nathan, firstly congratulations on a great 2012 and thank you for talking to us.

Nathan: Thanks, it was a bit up and down but I’m happy with it as a whole. And thanks for having me.

You released your acoustic covers album in 2012, how did you decide which songs to cover and how do you feel the album has been received?

Nathan: I put the album out as I really wanted people to hear my voice… after being shunted off a show apparently looking for “the voice” and being the only person on there representing the greatest genre of all time… I needed people to hear what I could do fully not just 70 seconds of Bon Jovi. With this is mind it made it very easy to pick songs. My hero’s Glenn Hughes, Axl Rose, Michael Bolton etc all made the list and I wanted to do songs that I grew up with and have meant something to me. My dad was a huge Nirvana fan and also GnR so they were easy choices. The main focus was to show people I could sing and I like to think I achieved that. People are still buying it and I’m proud as its acoustic covers so you can really hear my voice and the songs I picked to showcase it.

You’re planning to record a second album this summer. I believe its an original album but will feature a Mitch Malloy cover? What can you tell us about the album and who will be playing with you?

Nathan: The track with Mitch will be separate. We are still talking about how/when etc but all very exciting I adore his song “our love will never die” and he likes my voice so it’s a good match. He is also an incredible guy and father to his daughter.
The album will be under a band name and will be entirely original. I’m not giving too much away right now but I have the perfect producer and also a killer list of players that wanna play on it. The songs are great and I really wanna record a great rock album like the ones we used to listen to, that you can listen to from begin to end and enjoy every track for a different reason. There will be big guitars and big vocals but there will also be tenderness and orchestration. I want people to be happy and then heart broken, I want them to care about me then hate me haha. The writers and I are way to excited to get in the studio and hope to be able to show you some stuff before I leave the UK again for Trans-Siberian Orchestra in October.

So lets talk about Trans-Siberian Orchestra. How would you describe TSO to people in the UK who might not be familiar with them?

Nathan: In a sentence…. A heavy metal christmas haha
No seriously it’s some great great stuff and I adore performing it.they are known for their enormous stage shows the likes of which make Kiss look like Disney on ice.
It has a huge fan base and they have been going 16 years under control on Paul O’Neill (Aerosmith, Scorpions etc) he wrote a series of rock operas and each singer plays the role of a character in these operas. They are great stories and messages and people come to the christmas show to hear great music played lived by great players and singers and also to get into the christmas spirit…. nothing says Jesus’s birthday like flames, risers, prog and lasers.

How did the opportunity to join Trans-Siberian Orchestra come about?

Nathan: I was scouted on YouTube haha. People over there were calling me the Justin Bieber of the rock world… hmmmm anyways, a scout saw my videos and asked me to come and audition at the studio in Tampa and audition… I did and was successful.

What was it like to be part of such a large scale epic project, sharing the stage with the likes of Jeff Scott Soto and Al Pitrelli?

Nathan: It was insane. I never took it for granted literally nothing on earth touches it. And to be on stage with Jeff who I have admired for so many years was amazing and Al is probably my favourite guitarist in the world. He makes the guitar his bitch and plays it like a singer sings, very inspiring and surreal rocking out with him to think he has been next to so many great frontmen. From the stage to the hotels, tour bus, catering, radio everything was huge and on another level to anything I’ve ever done before.and it was so nice to do it with such pros and nice people. No drama just professionalism and great times I will never forget.

Touring 21 states in 2 months with Trans-Siberian Orchestra, that must have been exhausting!

Nathan: I was knackered when I came home. I am still shaking off an illness now. They do make you comfortable it’s just there are so many two show days which is unlike any other rock show.
You have to pace yourself and you really can’t go out and get twatted drunk every night…. just on your two days off a week… haha

Can you tell us anything about your future plans with Trans-Siberian Orchestra?

Nathan: I will return again in the fall with Trans-Siberian Orchestra to do the winter tour again and maybe this year I will be over recording with them but nothing is set in stone yet. There are two albums Paul has written and it just depends if my voice fits the characters and songs.

In 2012 you appeared on several UK TV shows, including “The Voice” and “Superstar”. Is there a different dynamic to performing on television to millions of viewers at home compared to performing in an arena? Also, do you feel that TV talent shows are prejudiced against rock singers and how was the experience for you overall?

Nathan: They hate rock on these shows. Which is such a shame living in a country that created the worlds biggest rock bands…
I was pi**ed off with the voice as no one else represented our genre which was criminal. I think if the panel had a rocker in it the show would have been a lot better and I probably woulda been through… although looking back I’m glad I didn’t haha.
The problem with superstar was from day one Andrew LLOYD Webber was harping on about finding a frigging rockstar the likes of which could bring an arena rock vocal… like Ian Gillan ,Seb Bach, Steve Balsamo, Ted Neeley etc. I then strolled on the show and got put down for my apparent attitude and diva like antics and not my voice. They actually hardly ever spoke about my vocal at all. It was all about my ego… which by the way I have not got. Its just when someone comes on a show like that and doesn’t work at Tesco and is aware that their voice is alright they have to hate on you and try and bring you down and tv producers are scared that someone with a backbone can win a competition which in America is fully encouraged… no matter what you do you will never win against someone like Andrew LLOYD Webber. I loved the guys …well some of them. Mel C is a wonderful lady and…. that’s all I have to say. Glad I did it cos I got to sing Sweet Child o Mine to millions of people, probably one of my proudest moments in life. So to round up I wish they woulda supported me and critiqued me on my voice not my behavior… which didn’t happen… well apart from making the idiot from ITV cry and not wanting to wear a fu**ing top hat… would you?

Not unless it belonged to Slash!!! In the last few years you’ve been involved with various projects, from Route 66 and Thriller through to the Trans-Siberian Orchestra. Has there been any particular highlights or challenges you’ve had to face during this time?

Nathan: Highlights are my album launch. It was my first solo show after superstar and I had a sellout show in my hometown of reading and my fans came from all over the country to see me. Such an incredible feeling.
Also my standing ovation in Salt Lake City it’s on YouTube and I still cannot believe it happened…. 10,000 yanks stood up and clapping for me and I hadn’t even finished, I wasn’t even singing my song, a girl was sick and I had to step in last minute.
Challenges… being away from my family at christmas… that sucked.
Also trying to get the rock world to give a f*ck about me when I’ve been on reality t.v. But I’m kinda loving that. I’m a stubborn little f*cker you see?

Are you planning any live shows for the UK in 2013?

Nathan: Yes, I have two shows at the Hippodrome Casino in Leicester square February 10/11th where I will being debuting the original material. Ticket info available on my website www.nathanrocksinger.com also doing a few gigs here and there you may also see me pop up on tour with Jeff Scott Soto on tour… but mostly this year is about making a great album with great people. There will be one big show before I go away in October.

Finally, is there anything else you would like to share with your fans here in the UK?

Nathan: Just stick with me, I am trying my nuts off and all I can say is thank you. Its amazing to think that people have watched me on tv or YouTube and then spend there money to come to gigs or buy an album… so humbling and I never give up. I don’t mince my words either and tend to offend some people but that means the ones that do get me really get me and for that I thank you. I don’t want everyone to love me I just want people to like my music and hope it gives someone some escape especially in times like this. Lets start a revolution…

Thanks for talking to us Nathan. All the best for another great year.

Nathan: Thanks so much.