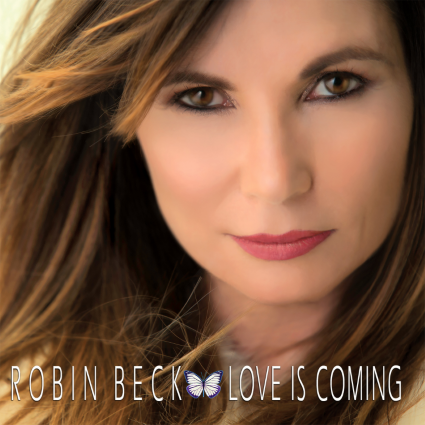 Robin Beck has been very over the last few years. In 2009 Beck kicked off her new label, Her Majesty’s Music Room via Sony distribution, with a 20th anniversary Silver Edition reissue of “Trouble or Nothin'” – completely rerecorded. In 2011, Beck put out “The Great Escape,” which included “That All Depends On What You Do Tonight,” her duet with Joe Lynn Turner of Rainbow and Deep Purple, and “Till the End of Time,” her duet with husband James Christian of House Of Lords. She then spent 2012 playing arenas all over Europe, starting with 21 performances of “Rock Meets Classic,” alongside Deep Purple’s Ian Gillian, 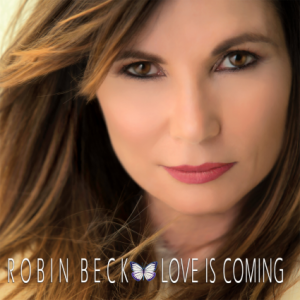 I enjoyed this album from start to finish. The first 2 songs, “Island” and “On The Bright Side” launch the album with a happy, upbeat, melodic rock feel good melodic factor.

“In These Eyes” is my favourite ballad on the album. It has a real sense of powerful emotion behind it, driven by the pairing of Beck’s vocals with the keys. The albums titular track, “Love Is Coming”, is the heaviest of the tracks here, with good rhythm and a cracking chorus, and is a definite highlight.

“Lost”, takes us back to firm melodic rock ballad territory, but the album has some quite varied styles throughout. “Crave The Touch” is another song with a good rhythmic tempo, while “If You Only Knew” is more of a soul song than anything else.

“Here I Am” is another melodic rock song that feels like it gives us a deep insight into Robin Beck. It starts off slowly, and builds up the pace as it goes. It rocks, but it has a beautiful sensitivity to it.

“Girl Like Me”, another one of my personal highlights, contains all the trademarks that I associate with a Robin Beck song; Robin’s smooth vocals, with an uptempo beat, rocking guitar solos, a song that kicks ass and drips sass. It starts off with an excellent solo and we probably see more of her vocal range here on display here than on the other songs.

The album finishes with “Warrior”, a very relaxed song which lyrically shows the kind of confidence and assurance that only someone with a resume of musical accomplishments that an artist like Robin Beck can lay claim to.

Final Verdict: 8.5/10. This album, like Robin herself, kicks ass and drips sass. I enjoyed this album all the way through, I enjoyed its varied styles, and I think that shows in my pick of favourite songs here, with “Girl Like Me”, “Love Is Coming”, “Here I Am”, “On The Bright Side” and “In These Eyes” stealing the show. I highly recommend this one.

“Love Is Coming” is coming out October 13th via Frontiers Music Srl.